Top 5 Marketplaces that make a difference 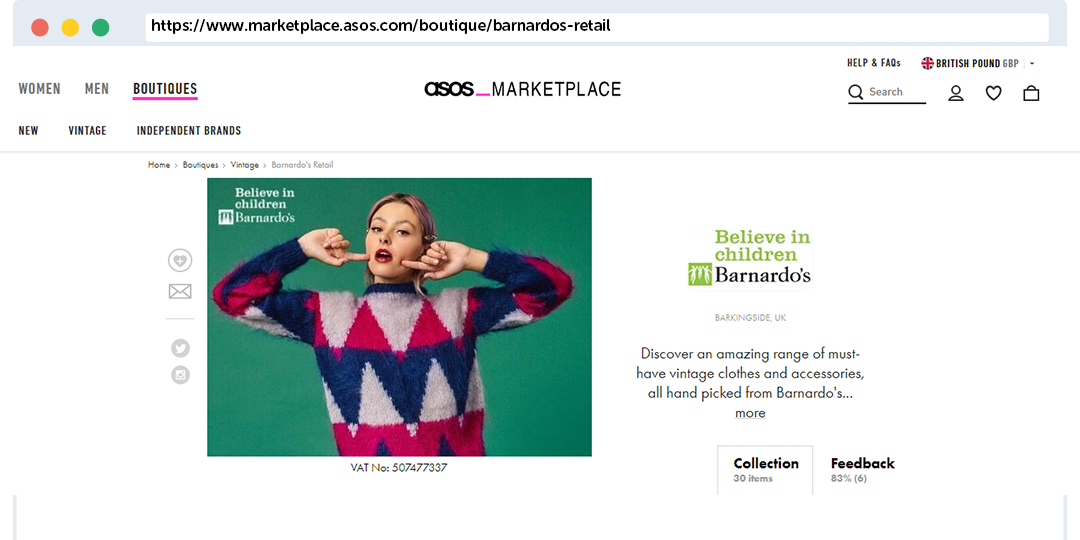 ​Two of the major players in marketplaces, the infamous eBay and the unstoppable Amazon, have shaped the way that consumers shop and have become an intrinsic part of everyday life for consumers the world over. But there are some new kids on the block that are breaking into the emerging marketplace scene, and are sure to shake things up with new and innovative ways of selling, while giving back to society at the same time. This sustainable element makes them ideal for charity retailers.

With 56% of all product searches now beginning on Amazon, it’s no surprise that other retailers want a piece of the action. Research also suggests that marketplace sellers will contribute £21.3bn to the British economy by 2020 – up from £11bn in 2016.

So, we’ve compiled a list of online marketplaces with a difference:

1) ASOS Marketplace
ASOS has become a brand synonymous with the Gen Z and Millennial markets, and the ASOS marketplace is just as popular with its with its trendy and efficient service. However, if you think ASOS marketplace is just for small start-up brands, you’d be mistaken. Recently ASOS Marketplace held a charity pop-up event at in Camden, aligning nicely with the recent launch of charity retailers on the marketplace earlier this year. Charities such as; Barnardo’s, British Red Cross and Oxfam have expanded beyond the ‘traditional’ high street staple and are now partnered with one of the most popular brands on the market, all the while expanding reach and encouraging more people to shop with charity retailers.

2) Buengo
Created with an aim of making it easier for people to give back to charity without having to dip into their own pockets, Buengo is an online marketplace where people can sell their unwanted belongings, and choose to give the proceeds to a number of different charities available on the marketplace.

3) Jumblebee
An online marketplace that is all about fundraising. Jumblebee encourages communities to sell their unwanted goods on their ‘online charity shop’ with the option to choose which cause customers want their proceeds to go to.

4) MAMOQ
Born out of a frustration of not being able to easily access sustainable and ethical brands, MAMOQ is an online retailer partnering with 85 brands that only sell items which have a positive impact on the planet. Last year searches for ‘sustainable fashion’ increased 66% and sales of sustainable and ethical fashion increased by 20%, and with the battle against fast-fashion gathering momentum, this is certainly an area that is growing and becoming more and more important for customers.

“We wanted to help environmentally, and ethically conscious consumers find stylish clothing that reflects their values, whilst creating a greener more positive world.”

5) One Cherry
Committed to encouraging more people to start reusing items by making shopping from local second-hand shops ‘easy and enjoyable’, One Cherry allows customers to shop online to an existing network of over 13,000 second-hand shops in the UK. The process is easy, consumers can browse online on the One Cherry mobile app, buy the product, collect and try on in-store at the second-hand shop.

87% of produced clothing ends up in landfill and with the fashion industry being responsible for over 5% of global emissions (Forbes, 2019), sustainability is no longer just a buzzword, it’s about changing behaviour for a better future. These charity marketplaces are the way forward for enabling easy access to second-hand items, raise money for good causes, and provide a perfect opportunity for charities to reach new audiences and encourage more shoppers to #ShopSustainable by shopping with charity retailers.