Covid-19 impact, and what’s next – a letter from our CEO 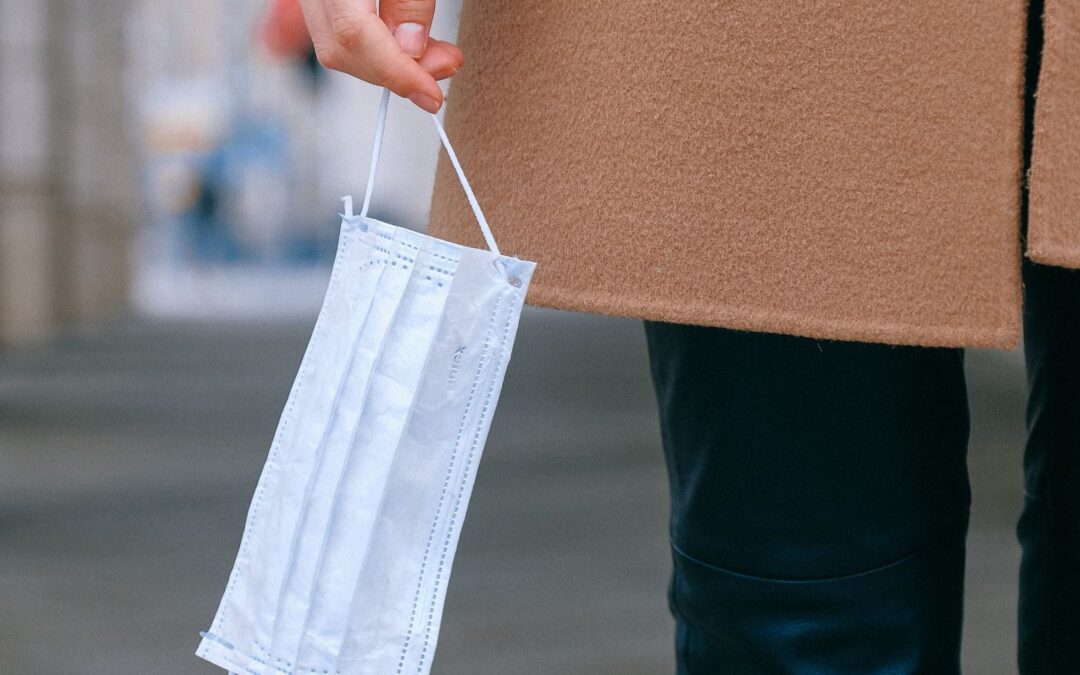 As the world continues to grapple with the effects of COVID-19, no part of society seems to be left unscathed. Fears are surmounting around the worlds economic health, and the dramatic changes to our lives ahead. There won’t be many among the 7.7 billion people on Earth who haven’t been affected in some way by COVID-19. From sickness and the death of loved ones to work shortages and school closures, the pandemic’s ramifications have touched every part of society.

Data from the World Economic Forum (survey of 347 risk analysts on how they rank the likelihood of major risks in the aftermath of the pandemic for the next year and a half) reveals that economic fallout poses the most likely threat in the near future, dominating four of the top five risks overall. With job losses felt the world over, a prolonged recession has 68.6% of experts feeling worried. 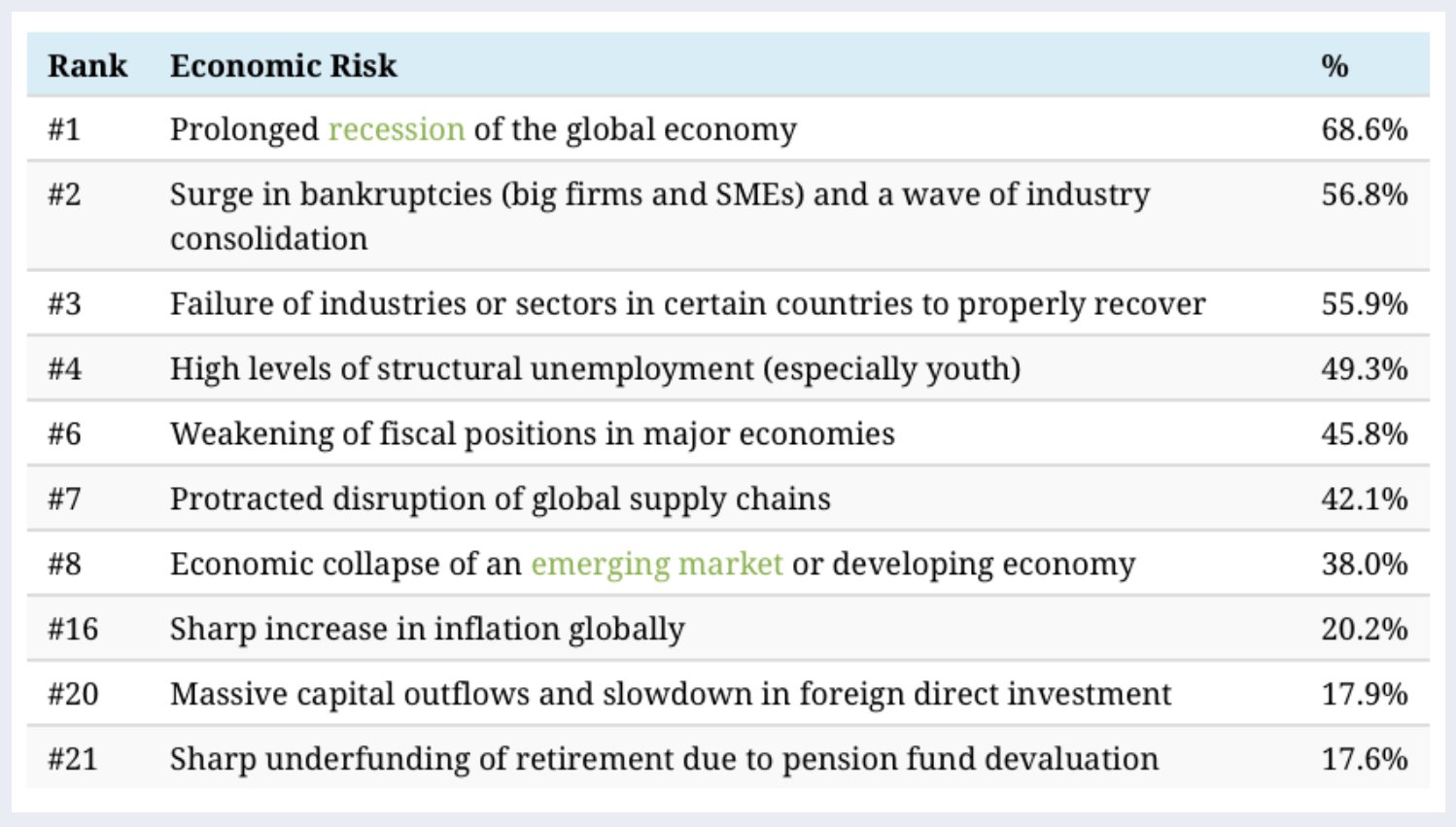 The pandemic has accelerated structural change in the global economic system, but this does not come without consequences. As central banks offer trillions of dollars in response packages and policies, this may inadvertently burden countries with even more debt for decades to come. The fifth risk was not economic, but geo-political with tighter restrictions on the cross-border movement of people and goods, Further restrictions on trade and travel movements are an alarm bell for 48.7% of the analysts— however they could have significant impact on the retail supply chain, increasing costs and making products scarcer.

Economic growth is a good thing.  It usually means there are more jobs to go around. Companies are more profitable and can afford to pay employees more and distribute dividends to the shareholders. A growing economy also means the government receives more taxes, or has room to cut them, spend more on benefits, public services, infrastructure and the wages of government workers. When the economy shrinks, all these things go into reverse. Most of the developed world, saw their economies shrink in Q1, as COVID-19 began to hit. 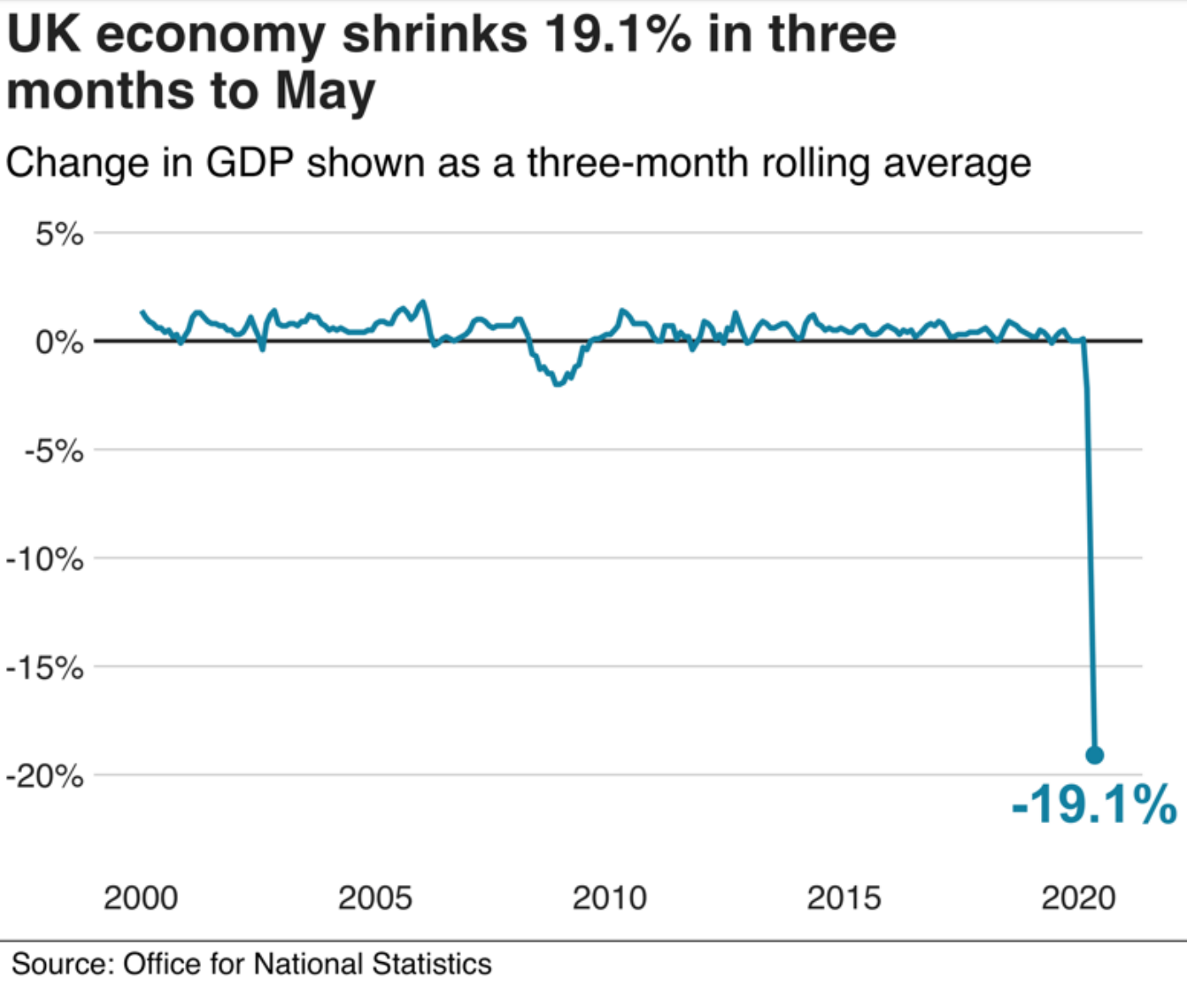 UK GDP fell by 2.2% in that first quarter, a recession is usually defined as negative growth for two quarters. Monthly figures show there will be an enormous hit to the economy in the second quarter of the year. The three-month period from March to May saw GDP fall by 19.1%. And figures for Q2 officially show that the UK is in a recession. The IMF predicts the recession will be over in 2021 and the world economy will start bouncing back, we are however, in uncharted territory, and no-one knows how strong that recovery will be.

If all the businesses which shut during the pandemic and lockdown could open quickly, the consequences of the recession would be less severe. However, there are fears over whether the virus will start spreading again, and people may be wary of travelling or going out even if they’re told it’s safe to do so. Obviously this is all a concern to retail industry.

At the start of COVID Deloitte started to run a sentiment survey this ran from 13 April to 18 May, the survey is based on the responses of senior figures from food and non-food retail, the two pie charts show the final view of the sentiment survey from non-food retailers in the middle of May as they knew stores could open again. 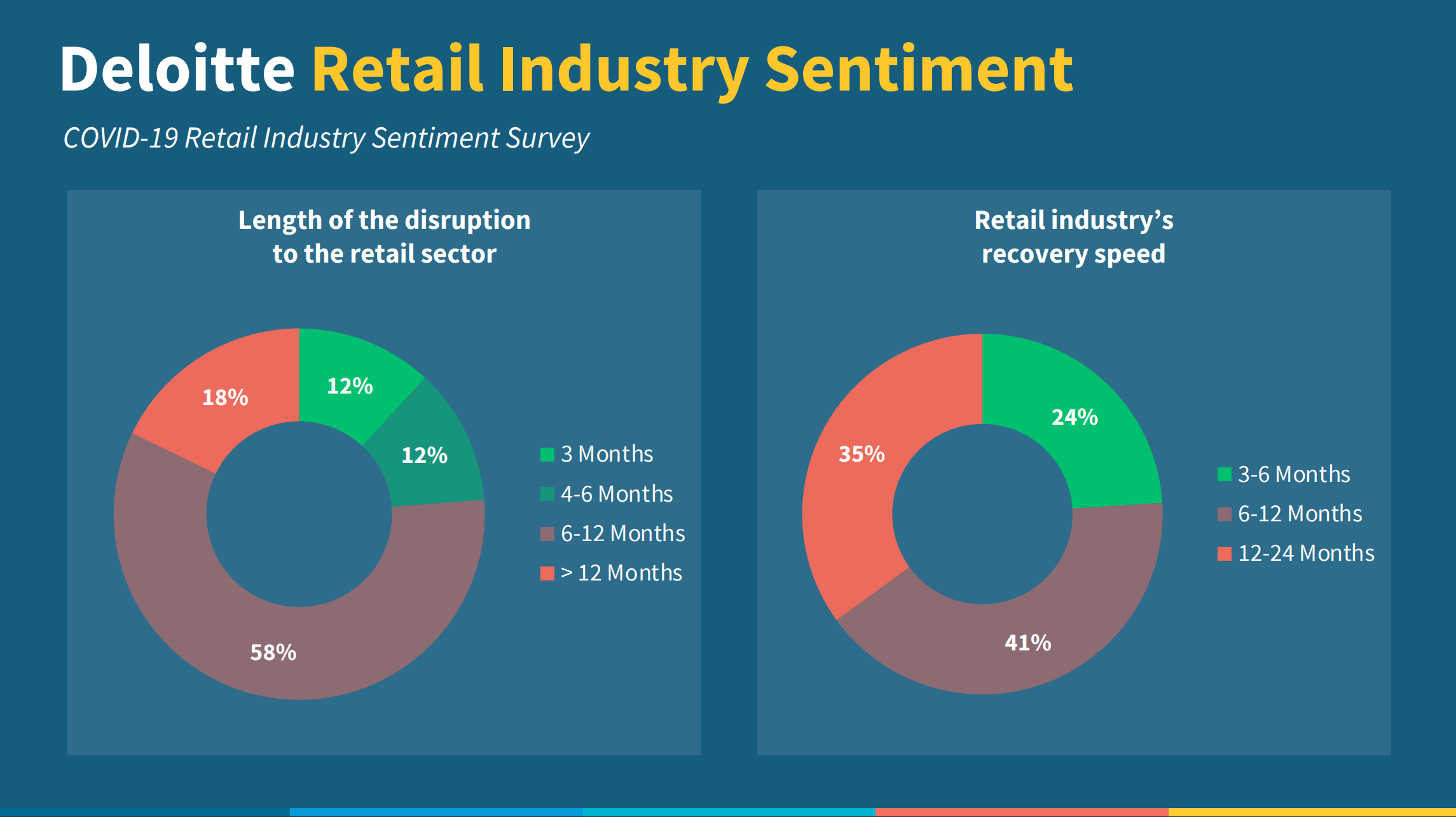 You can see that 76% of retailers expect the disruption to last over 6 months with 58% expecting it to last for over a year.

The speed of the recovery is most worrying, even after the disruption ends as 76% expect the recovery to take over 6 months with 18% saying it could be up to 2 years.  As you’d expect, food retailers were more buoyant.

What happened to customer spend

The BDO High Street Sales Tracker outlines the weekly sales changes of more than 85 retailers with some 10,000 individual stores. These are mainly located on high streets throughout the UK. As such it provides a very good indication of underlying trading conditions without the distorting effect of the large grocery retailers. 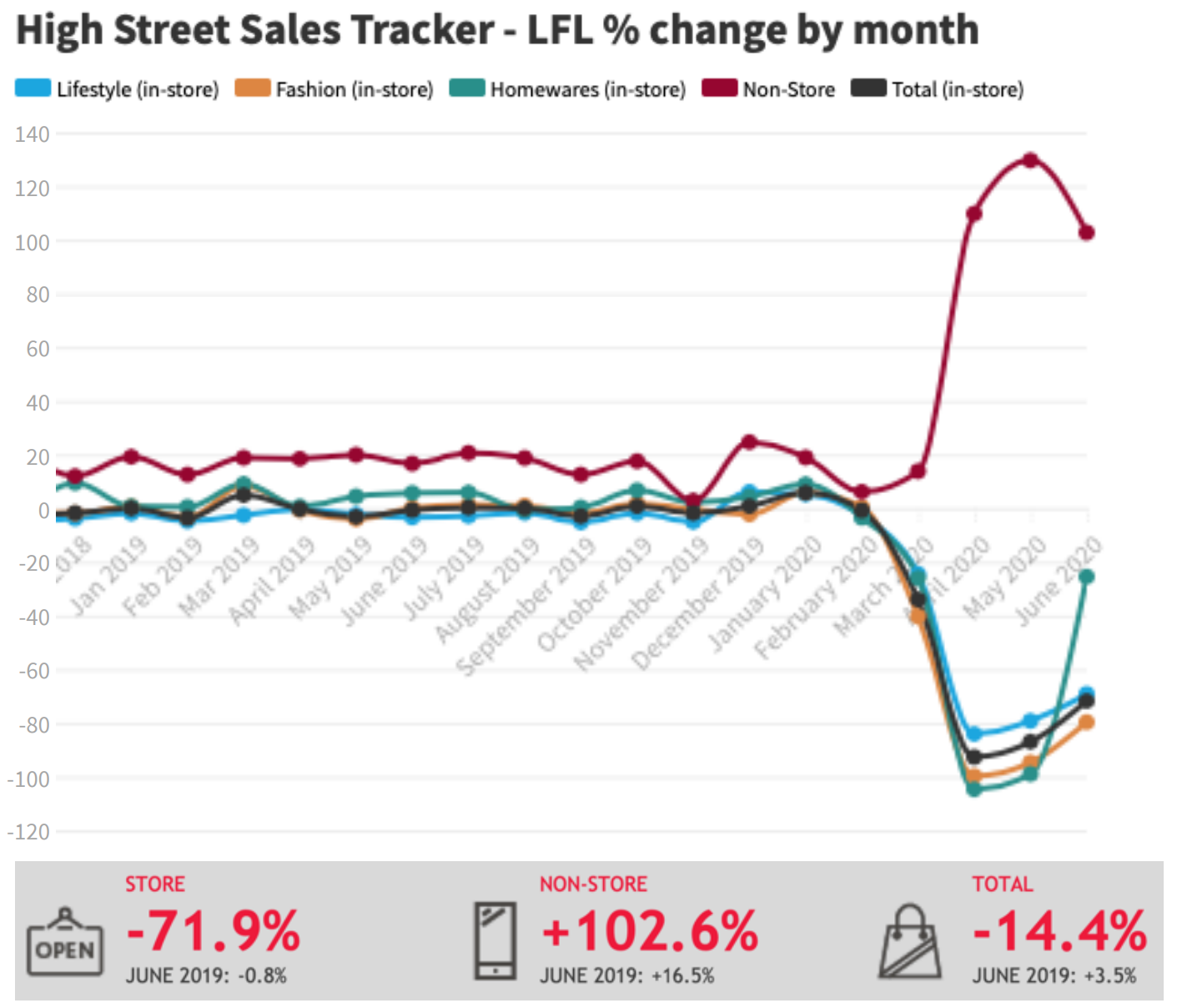 As you can see there was a significant drop off in physical shopping and a massive increase in online shopping, however even with the spike in online the like for like was still down by 14.4%.  The latest weekly results are giving some hope of improvement with the total being down by -4% and stores down by –35%, however this is early stages as our stores start to open again. At time of customer round table those numbers were -6% and stores down by –43% so again, early signs of improvement.

A significant proportion of UK consumers (46%) are buying products online for the first time and are experiencing new customer journeys. A key consideration for retailers will be trying to identify which reactionary behaviours will endure and how they will develop in the interim. These permanent behavioural shifts will not be uniformly expressed across all sectors and will depend on many factors such as penetration rates, market concentration, online retail capacity, socio-demographics and others. Even within sectors, notable differences may arise by age range of the consumer. Nevertheless, there is a clear statistical bias towards a higher frequency of online shopping at the expense of the physical channels.

Five key themes are likely to emerge as we head towards a new normal:

Changes we’ve made, and what’s next

Like all businesses Cybertill were initially focused on protecting our business in order to stay operational for our customers, this involved us trying to understand the cash position to ensure that we were available to support our customers in the long term; reviewing how COVID would impact the consumer and their shopping habits.

Throughout this challenging time, Cybertill has worked with customers to maintain stability. Over lockdown, we offered 2 free training webinars per week to our customers to help Cybertill users upskill during downtime. It was important to us that we could keep our product team developing new products during lockdown – new developments will be announced soon (subscribe for updates!).

The data shows that the next phase of retailing isn’t going to be easy. So, going forward we are changing out pricing structure and I’m happy to announce that we can now offer all of our software for a simple monthly cost, making it easier to for new and existing businesses to afford. The new pricing model also features our Cybertill 90-day cancellation policy, meaning that our customers can easily open and close stores without worrying about capital expenditure.

I’m proud of my business, my colleagues and my customers for how we’ve all pulled together and I’m excited about the next chapter, let’s make retail sustainable together. 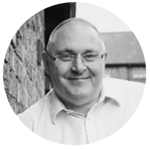 Ian is Cybertill’s founder and CEO (and, as he would add, Chief Entertainment Officer). He believes that many of the omnichannel challenges that multi-store retailers face can be solved by gathering and utilising data more effectively. When he’s not busy CEO’ing, he is also an avid cyclist and music fan.

Ian is Cybertill’s founder and CEO (and, as he would add, Chief Entertainment Officer). He believes that many of the omnichannel challenges that multi-store retailers face can be solved by gathering and utilising data more effectively. When he’s not busy CEO’ing, he is also an avid cyclist and music fan.